The Gut-Skin Connection: How Altered Gut Function Affects The Skin

I’m preparing for my talk at the upcoming Wise Traditions Conference in Santa Clara, CA on November 10th. I’ll speaking on the “gut-brain-skin axis”, a fascinating topic that I’ve been exploring for some time. I hope some of you will be able to come to the conference, but I thought I’d share a little slice of my research here for those of you who can’t. (If you don’t make the conference and want to watch my entire presentation, I believe the Weston A. Price Foundation sells DVDs of the talks after the fact.)

I’ve discussed the gut-brain axis several times on my radio show, and I’ve at least mentioned the triangular connection between the gut, brain and skin. In 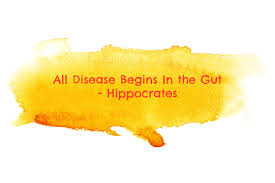 this post I’d like to go a little deeper on the gut-skin connection. Researchers as far back as 1930 suspected a link between gut and skin health, and modern research has now confirmed the importance of this relationship. And as a clinician who works with people on these conditions, I’d go as far as to say this:

Epidemiological evidence shows a clear association between gut problems and skin disorders. A recent report indicated that small intestine bacterial overgrowth (SIBO), a condition involving the inappropriate growth of bacteria in the small intestine, is 10 times more prevalent in people with acne rosacea than in healthy controls, and that correction of SIBO in these individuals led to marked clinical improvement. (1) 14% of patients with ulcerative colitis and 24% of patients with Crohn’s disease have skin manifestations. (Interestingly enough, a study just came out showing that a drug normally used to treat psoriasis is also effective for Crohn’s disease.) Celiac disease also has cutaneous manifestations, such as dermatitis herpetiformis, which occurs in 1/4 of celiac sufferers. Celiacs also have increased frequency of oral mucosal lesions, alopecia and vitiligo. (2)

Intestinal permeability (a.k.a. “leaky gut”) causes both systemic and local inflammation, which in turn contributes to skin disease. In a study way back in 1916, acne patients were more likely to show enhanced reactivity to bacterial strains isolated from stool. 66 percent of the 57 patients with acne in the study showed positive reactivity to stool-isolated bacteria compared to none of the control patients without active skin disease. 1 In a more recent study involving 80 patients, those with acne had higher levels of and reactivity to lipopolysaccharide (LPS) endotoxins in the blood. None of the matched healthy controls reacted to the e. coli LPS, while 65% of the acne patients had a positive reaction. Both of these studies suggest that increased intestinal permeability is an issue for a significant number of acne patients. (4)

Speaking of permeable barriers: most of you have heard of leaky gut by now, but what about “leaky skin”? The main function of the skin is to act as a physical, chemical and antimicrobial defense system. Studies have shown that both stress and gut inflammation can impair the integrity and protective function of the epidermal barrier. This in turn leads to a decrease in antimicrobial peptides produced in the skin, and an increase in the severity of infection and inflammation in the skin. (5)

The gut flora also influences the skin. Substance P is a neuropeptide produced in the gut, brain and skin that plays a major role in skin conditions. Altered gut microbiota promotes the release of substance P in both the gut and the skin, and probiotics can attenuate this response. (6) The gut microbiota influences lipids and tissue fatty acid profiles, and may influence sebum production as well as the fatty acid composition of the sebum. (7) This may explain why a Russian study found that 54% of acne patients have significant alterations to the gut flora (8), and a Chinese study involving patients with seborrheic dermatitis also noted disruptions in the normal gut flora. 2

Another line of evidence suggesting a connection between the gut and skin is the observation that probiotics improve skin conditions. Oral probiotics have been shown to decrease lipopolysaccharide, improve intestinal barrier function and reduce inflammation. The first formal case report series on the value of using lactobacilli to treat skin conditions was published in 1961 by a physician named Robert Siver. He followed 300 patients who were given a commercially available probiotic and found that 80 percent of those with acne had some clinical improvement. 3 In a more recent Italian study involving 40 patients, Lactobacillus acidophilus and Bifidobacterium bifidum in addition to standard care led to better clinical outcomes than standard care alone. (9) And another recent study of 56 patients with acne showed that the consumption of a Lactobacillus fermented dairy beverage improved clinical aspects of acne over a 12-week period. (10)

The beneficial effect of probioitics on skin may explain why pasteurized, unfermented dairy is associated with acne, but fermented dairy is not. I haven’t seen any studies on raw dairy and skin conditions, but my guess is that it wouldn’t be associated either. Orally consumed probiotics reduce systemic markers of inflammation and oxidative stress, both of which are elevated locally in those with acne. (11) Oral probiotics can also regulate the release of pro-inflammatory cytokines within the skin. (12) The fermentation of dairy reduces levels of insulin-like growth factor 1 (IGF-1) by more than four-fold. (13) This is significant because studies show that acne is driven by IGF-1, and IGF-1 can be absorbed across colonic tissue. (14) This would be particularly problematic when increased intestinal permeability is present, which as I mentioned above is often the case in people with acne.